Two types of charts are used to track variable data; one for averages and one for ranges. These charts are commonly used together and are known as an X-bar & R Chart.

The Chart monitors the process center, or location.

The R Chart monitors the process variation, or dispersion.

As the data points for each subgroup are plotted, the points are connected to the previous point and the charts are interpreted to determine if one of the out-of-control patterns has occurred. 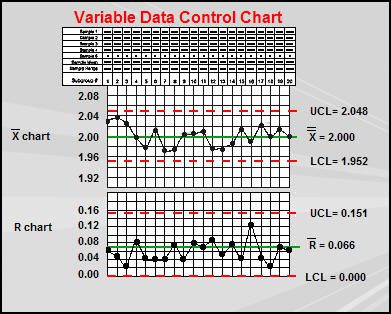 How you can use these free resources

Here you will find a wealth of information to help answer your most pressing questions about continuous improvement, statistical quality control, lean six sigma, FMEA, mistake-proofing and much more.